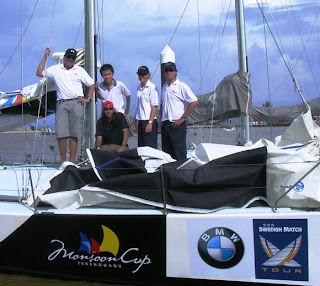 That was taken from today's NST. Read more here.

But let's study the Monsoon Cup.

His successor Abdullah Badawi didn't want to be left out and saw Pulau Duyong as an ideal destination.

With businessman Patrick Lim on board, they developed the whole area turning it from a sleepy coastal kampung to a luxurious resort style concept - but not as luxurious as YTL's Pangkor Laut Resort or The Datai in Langkawi.

Millions were spent. The return of investment was supposed to be the mileage the nation got from the international recognition from viewership and money spent by the rich and famous while in Terengganu.

For the locals - till today they don't know where is the start or finish line. Or even if there is a start of finish line to begin with.

That's the story of Monsoon Cup.

Is it relevant? I wonder.

HD says: Remembers visiting Pulau Duyong just before the inaugural Monsoon Cup race in 2005. It was an 'interesting' experience.