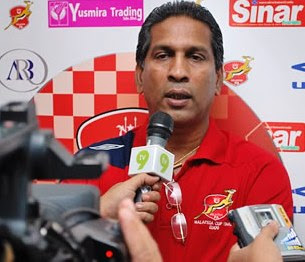 That could be the possible destination for Kelantan's B.Satianathan (pic).

Satianathan is a man who prefers to be on the field with the lads than watching from the stands.

This was evident as he was feeling 'uncomfortable' sitting at the VIP box during the KL v Kelantan friendly match at the Selayang Stadium two weeks ago.

He didn't head-butt anyone or performed a flying kick on any official - although he would love to if given the chance.

All he did was question the Super League fixture between two teams last year.

Now that's in the past, as reported by Utusan Malaysia today.

HD says: I doubt Satianathan will coach an M-League team. Anyone wanna bet? Loser gets to buy lemang and rendang ayam.