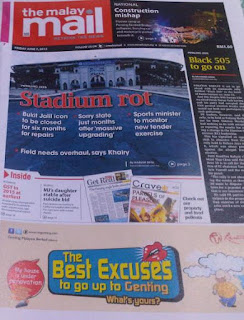 And the National Stadium in Bukit Jalil will be closed - yet again!

What about the contractors who were tasked to do the upgrading works? Do they get away despite the shoddy work?

Wasn't the stadium just reopened in April? Wasn't the field worked on late last year, resulting in the Malaysia Cup final (Oct 20) between Armed Forces and Kelantan to be played at the Shah Alam Stadium instead?

That was the front page of The Malay Mail's first edition (second edition was on the construction mishap at the Penang second link bridge).