State of emergency declared in Muar 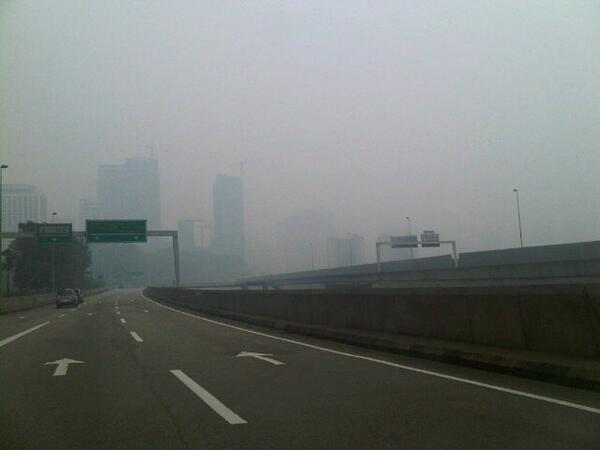 Natural Resources and Environment Minister G. Palanivel in his latest Facebook posting announced that Prime Minister Najib Tun Razak had declared emergency status in Muar and Ledang with immediate effect after the Air Pollutant Index (API) readings there reached more than 750 at 7am today.

The Department of Environment (DoE) reported that the API reading in Muar as at 7am today was at 746.

However, at 11am, the API reading in Muar reduced slightly to   690 but was still at the hazardous level.

Also read Reuters about the smog that envelops Malaysia here.

Meanwhile, the  Indonesian Environment Minister Balthasar Kambuaya has identified eight of the companies that are being investigated for burning in Riau and Jambi that led to the haze, as reported here.

Picture taken on Akleh heading to KL (just after KLCC exit) at about 1.30pm.

HD says: Will the powers-that-be ever learn? Or will this episode be quickly forgotten?
emergency G. Palanivel haze muar Najib Razak smog