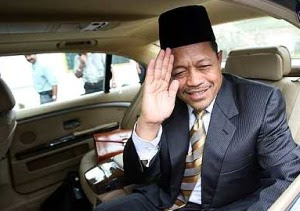 My 11 years in journalism, I certainly had fun in Bangi yesterday.

The flag raising ceremony of the Malaysia Games was held at 5pm at Pendeta Zaaba College in University Kebangsaan Malaysia yesterday.

As I was taking a slow drive to Bangi, I received an email from the Malaysian Amateur Athletics Union (MAAU). It stated MAAU president Shahidan Kassim (pic) wanted to meet the press at 5pm at the same venue.

And when I reached UKM, it was a joke of all sorts.

On at the other end of the venue, Shahidan and MAAU deputy president Karim Ibrahim was busy gathering the Press to make an announcement with regards to the national sprinters fiasco.

Mind you, Shahidan's pc was held during the flag raising cermony!

It was such a "heated" affair that an athlete from Malacca fainted. Kesian.

Shahidan was kind enough to buy us buns and drinks. He also asked us to have a bite before he started with the pc.

And then we had Shahidan saying:

And when several chatty female participants were walking by, Shahidan hushed them before saying....

Read today's The Malay Mail on Shahidan hogging the limelight at the ceremony. Also, the sprinters could lose their contracts with NSC.