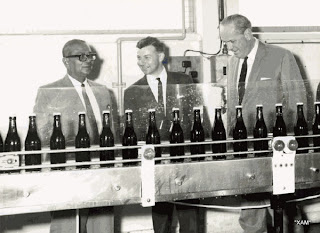 Certain ‘religious’ people have a keen fascination on beer and liquor.

And it looks like the inaugural Malaysia Day Ex-International/State Invitational Soccer 9s in KL is their latest target.

These group question to why a beer company – in this case Carlsberg – are the sponsors of the tournament.

Guinness Anchor Bhd was incorporated on Jan 24, 1964 and the company changed its name to Guinness Malaysia Bhd on April 15, 1966. 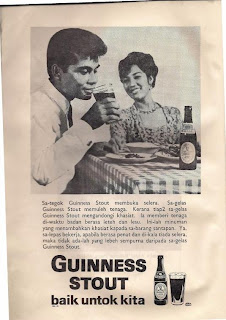 Our first Prime Minister Tunku Abdul Rahman launched the new brewery in 1966 as evident in the first photo above.

But some ‘folks’ have launched an attack on Tunku as seen here.

The second picture is an advertisement that appeared on page 2 of the Kesatuan Guru-Guru Melayu Malaysia Barat's AGM booklet in 1968. The following page was a message from the then deputy Prime Minister Tun Abdul Razak.

No one kicked a fuss then.

Carlsberg sponsored Liverpool up until last year. Everton has Chang Beer on the front of its jersey.

The National Sports Council, the funding arm of the Youth and Sports Ministry, enjoys millions of Ringgit in sponsorship from Sports Toto. Dunhill used to sponsor, and were the biggest sponsors, of our M-League back in the day.

By the way, is smoking haram or makruh? Read here and here for an educational explanation.

So back to the question to why a beer company would sponsor the ex-international event – because people like you don't take out a single cent to sponsor such events!

p/s: If you can't handle reality, then you may enjoy this fairy-tale like article on Ronaldo.

HD says: Respect religion! Don't use it as a tool to serve your agenda.