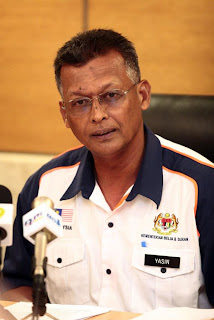 Good day to you!

Maybe, at yesterday's meeting, due too short a time, there appears certain muddling up on the MSBF's internal dispute.

To avoid unneccessary speculation, I attach herewith our official version of the dispute which had since been reported to the police under the Penal Code and soon be filed in court for legal proceedings. If the interested parties represented by SCO and Melvin, they can certainly enter the defence either responding to the police investigations or by evidence adduced at the High Court proceedings. It was likwise reported to YB Tony Pua, MP for Petaling Jaya Utara constituency in which the MSBF office is once situated

I have intentionally excluded the exhibits cited therein, to avoid the file capacity being over-sized but which can be easily retrieved for reference.

Hitherto, SCO did not precisely cite that oyur MSBF does not exist; in fact, it has been an accredited as NSA of OCM ever since 1986. For proper order, MSBF shall remain in its entirety in its NSA oficial status until the Court rules otherwise. Prior thereto, the element of subjudice prevails. In addition, by law there is only one NSA belonging to one sport and OCM being bthe custodian of the Olympic Charter shall certainly observe the same.

As to the SEA Games squad, it has to be accredited by this MSBF for which we will agree thereto provided that it does not incur this MSBF for additional Category B particpation cost unless the players concerned pay on their own. In any event, we have written to SCO to lift their freeze on our Maybank accounts who demanded SCO must apply their lift based on this Federation authorisation for which our staff were made to suffer without salaries for 3 tyhe past 3 monhs due to SCO's irresponsible actions with collusion with Melvin behind our backs.

We have copied this letter especially to the offices of our Prime Minister and that of our Sport Minister to alert them the cause of SCO's blockage to obstruct MSBF's participation in the upcoming SEA Games.

Professor Dato' Ar. W.Y. CHIN
That was the email sent out to Olympic Council of Malaysia (OCM) president Tunku Imran Tuanku Jaafar and several other officials yesterday.
Based on this letter and the attachment that was sent, a police report was lodged against Sports Commissioner Yasin Salleh (pic) and MSBF secretary Melvin Chia. Copies of the letter was also sent to the Prime Minister's Department.
Read all about it in From the Sidelines today.
HD says: Sigh!