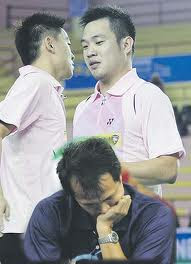 This was reported in The Star today.

Rexy, meanwhile, will not stand in their way - as seen in today's NST.

However, Kien Keat and Boon Heong have not seen much success - in the form of major titles - since.

Rexy, nevertheless, has been defensive over the performance of his lads. Such is only natural for any coach.

It must be noted, Kien Keat and Boon Heong remain the best pair in the country.

So will Kien Keat and Boon Heong enjoy a memorable stint under Pang Cheh Chang?