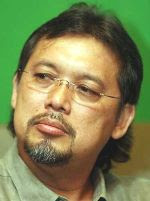 Could Razif Sidek (pic) be named as KLRC's doubles coach?

It is obvious Razif is eager to achieve something, something the BA of Malaysia (BAM) couldn't or didn't offer.

Since quitting the national stable as coach in 1997 - after guiding Cheah Soon Kit-Yap Kim Hock to win the silver medal at the 1996 Atlanta Olympics - Razif has been a regular face on TV especially on Astro Arena.

Unlike his elder brother Misbun who has been quiet since leaving BAM in December, Razif often hogs the spotlight - and the limelight was on him yet again during the Raya do by KLRC.

HD says: And the Sidek legacy in coaching continues.