Too much football will kill you 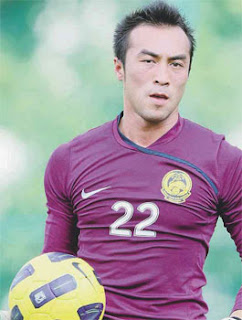 That is what Kelantan team manager Azman Ibrahim feels when it comes to their goalkeeper Khairul Fahmi Che Mat (pic).

Azman was quoted by today's The Star as saying;

"The player deserves some rest ... I think he has been playing non-stop since the beginning of the year. We are not being selfish, we are just concerned about his future..."

There has been studies that "watching football can kill you", "too much exercise can kill" and there's also Queen's Too Much of Love Will Kill You.

Has Khairul Fahmi's "busy schedule" kept him on his toes, transforming him into the best goalkeeper in the country?

Or will too much of football kill him?

HD says: Queen's Freddie Mercury remains one of the best entertainer the world has ever seen. FYI, Freddie's real name was Farrokh Bulsara, hails from a family with Persian blood, was born in Zanzibar (an island off the coast of Tanzania) and received his education in India before migrating to the UK.
football Kelantan khairul fahmi che mat