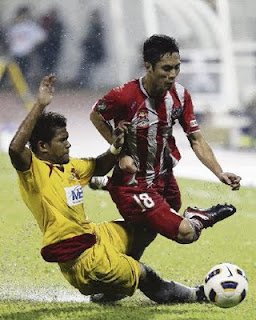 Who would you place your money on?

Selangor needs all three points to make it to the quarter finals.

KL only has to secure a draw to make it to the final eight.

P.Maniam is eager to impress his bosses and extend his life line after K.Devan left the Red Giants.

Razip Ismail is eager to continue his fairy tale run after the city lads were brushed off from even going beyond the group stage due to monetary problems before the Malaysia Cup started.

Selangor and KL settled for a goalless draw in their previous Malaysia Cup clash - the match which saw KL denied two penalties.

Razip cautioned his lads not to take the match lightly and believes it is an epic battle between both sides - as revealed in today's Mailsport.

Head over to the Shah Alam Stadium for a classic Klang Valley derby tonight.

The delayed telecast will be aired on Astro Arena (801) at 10pm while fans would be able to get latest updates from the Kuala Lumpur FA facebook page.