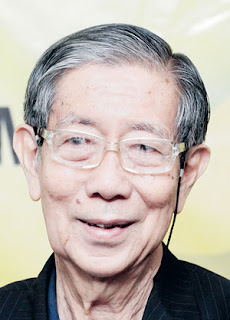 It is no secret I enjoy a cordial relationship with the Olympic Council of Malaysia, especially with its secretary Sieh Kok Chi (pic).

Reason? I am always able to get into a friendly debate with Kok Chi and we often end the conversation on a good note. It's always a learning experience talking to him.

But we've also agreed to disagree on certain things.

We spoke about three issues. Gan Teik Chai-Tan Bin Shen and the BA of Malaysia; Jawariah Nordin and the Lawn Tennis Association of Malaysia AND the power tussle within the Malaysian Snooker and Billiards Federation.

I respect Kok Chi's thoughts on the issues although I do not completely agree with him. But our rather long conversation, at the expense of someone else's phone (sorry bro hehe), enlighten us.

a. Shouldn't BAM admit their mistake, compensate and move on?
b. Wouldn't BAM do the same if Koo Kien Keat missed out the China Masters?
c. Since Teik Chai and Bin Shen are independent players and now have Zakry and Fairuzizuan wouldn't it be wise for them to not train with the BAM shuttlers?
d. Was the mediation process by OCM a sheer waste of time?

a. Has this turned into a personal spat, forcing the president to defend himself as seen here? Read here for another observation.
b. Serena Williams, Ana Kournikova and Thai girl Noppawan Lertcheewakarn did not beg for financial assistance from their respective national bodies. They trained on their own to become world class players. Shouldn't our players do the same?
c. Should national associations stop pumping in money for athletes and just concentrate on organising tournaments?
d. Isn't OCM seen as a party to this dispute due to the nomination of names for the Sea Games issue?

a. Very simple lah this one...would you want a president who not only knows about snooker but is able to double up as a coach OR a president who doesn't even know the sequence of the coloured balls that should be potted accordingly. You don't need to be a lawyer, doctor or engineer to answer this.
b. Isn't OCM seen as a party to this dispute as it seems to favour one of the party involved? Read here for a better understanding of the issue.

But sir, this you will agree that OCM can never be seen as neutral for some of its office bearers sit in the NSAs - the very same NSAs who receive financial support from the Sports Ministry through its funding arm the National Sports Council. No separation of powers?