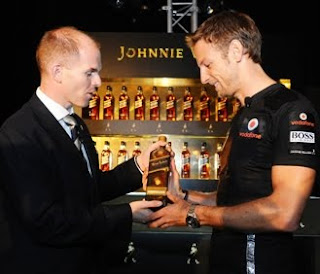 The press conference was an hour, Jenson Button appeared for about 15 minutes.

He spoke about his childhood, his diet and ended the evening by receiving a limited edition 1867 Johnnie Walker Blue Label from Mark Sandys (pic-left).

F1 journos were interested to know about Jenson's future.

But Paula Malai Ali did most of the questioning.

Nevertheless, she did ask - and in her own words - a "grown up question": Button's expectation in the Singapore GP.

Button is raring to win.