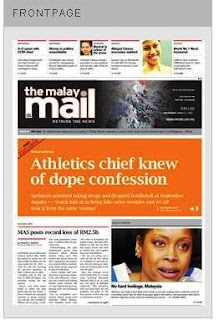 I got my hands on a copy of the letter and report of the "Investigative Interview of Athletes who did not attend Out of Competition Urine Test by the National Sports Institute (NSI)" on the six sprinters that missed the test on May 24, 2011.

Here are the facts;

4. Sprinters confessed their coach (Harun Rasheed) had asked them to "bring someone else's urine for the medical test."

6. One of the runners confessed having met Harun at the NSI car park at noon on May 24. Harun claimed he was only with the athletes until 9am and left for "Menara Maybank to sort out his daughter's wedding preparation" on the same day.

7. MAF deputy president Karim Ibrahim claimed he was unaware of the anti-doping test and "mentioned that a runner was recording their discussion at the Serdang Steak House on the mobile phone." (A CD of the recording was handed to the panel and was played during Dengan Izin recently.)

My question is - if the findings of the report were made public in September itself, wouldn't that serve as a deterrent and scare athletes and coaches from taking pills? And perhaps due to such 'fear' we could have saved the embarrassment of two of our national athletes who failed the anti-doping test during the Indonesia Sea Games in November.

It was exposed last year May that the sprinters took 'pink pills' (as seen here) and the runners confessed having taken such pills and many more in the interview session. Why no action was taken when we exposed it in May?

Read the front page story of today's The Malay Mail and here.