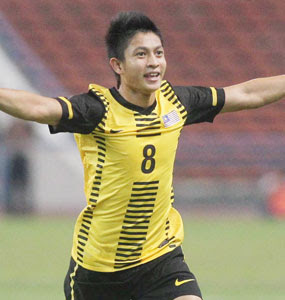 UPDATE March 13, 2012 12.15am: National striker Safee Sali commends his compatriots and told them not to fear other Asian players. Read more here.

"The agent who runs Japan Dream FA was a former Gamba Osaka skipper. I can't really remember his name right now but he approached me at Tosu Stadium. He said some people might laugh that Ryukyu has set their sights on Kecik but he strongly believes in the lad and believes if Kecik wants it badly, he will make an impression in Japan." - Harimau Muda A coach Ong Kim Swee.


It is not going to be one of those trials where a Malaysian player travels all the way across the globe only to give fans false hopes.

This time around it is for real and the only person who can screw it up is Kecik himself.

Wan Zaharulnizam Wan Zakaria or better known as Kecik among his peers is most likely to feature for Japan's Division three club FC Ryukyu.

Joined by another national player Wan Zack Haikal Wan Noor, the duo will attend trials at the Okinawa-based club to see if they are able to adapt to the environment before sealing the deal.

Read all about it in today's Mailsport.

HD says: Finally, a logical placement. All the best to both Wan Zaharulnizam and Wan Zack.