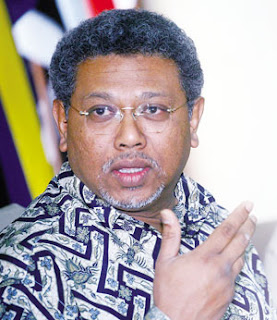 UPDATE 9.51am: I was informed there is a petition going around to discredit NSI and it was also published here. Once again, I hope it is mere talk.

For those of you who actually care, National Sports Institute (NSI) chief executive officer Dr Ramlan Aziz (pic) is admitted at the Serdang Hospital as he is suffering from severe pancreatitis.
For the rest of you, Ramlan – who is brother to famous music composer Roslan Aziz – has been asked to leave his post by April 1, 2012.
Apparently a handful of individuals believe they can do abetter job running NSI. They vented their frustrations to the Sports Ministry secretary general Mohid Mohammad – or so I was told.
I was also told by someone reliable within the Ministry that a letter was issued to Ramlan last week.
Obviously everyone would now want to be the CEO of NSI. Since NSI is now an independent entity, they will be getting millions from the Treasury. RM40 million just as a start up. With that money you can buy more than 10 Rolls Royce Phantom (each costing about RM2.9 million). Otherwise, can 'invest' in some cows and a handful of condominiums.
Of course parties with vested interest will try and tarnish Ramlan’s image, like how they got rid of him during his short tenure as the National Sports Council director general (2005-2007).
And I was also told that a certain rather high ranking NSC official is tipped to take over Ramlan’s position – despite having no background in the medical profession. Apparently, the attempt is to ensure the 'high ranking official' does not continue to be a ‘threat’ in NSC.
I really do hope this is mere talk though.
For the record, I’ve had my differences with Ramlan. Remember my article Dr Defensive - in which Ramlan was defensive over his former boss Azalina Othman Said’s questionable expenditures during her time with the ministry?
But Ramlan has always been an open and transparent person. Tak kuat merajuk.
Ramlan will surely greet me, or shake my hand at the very least. Tapi bukan semua orang gentleman.
Such is the sad state of affairs of Malaysian sports - as reported in Mailsport today.
HD says: If such politicking is happening at this level, what more would you expect from those below.
National Sports Council National Sports Institute ramlan aziz