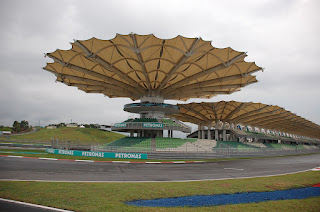 While the feat will be highlighted on the backpages of most newspapers tomorrow, there is a question that lingers on the minds of many - is there a need for the race to start earlier?

The race was stopped for sometime due to the heavy downpour and resumed just to end in time before there was complete darkness at the Sepang International Circuit.

To erect floodlights could turn out to be an expensive affair for the government and will not serve much of a purpose unlike in Singapore where the layout which is actually a series of streets in the city.

The need for the race to start at 4pm is to cater for the European viewers but it is strongly believed there is already an increasing number of viewers within the region (or similar time zone).

Starting early could also help see an increase of numbers at the stands which is quite disappointing at this year's race.

And there were claims of the roof leaking at the grandstand.

There is a dire need to reevaluate the Malaysian GP. Otherwise, it will just be another race on the F1 calendar.