Tunku Ismail to take over MAF? 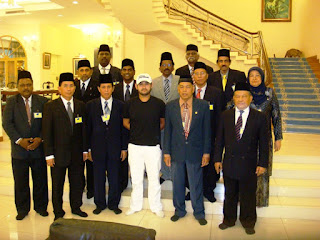 UPDATE March 22 9.53am - The picture (left) of Tunku Ismail with several MAF officials was emailed to me just minutes ago. The title of the email was 'TMJ bersama ahli majlis KOM'.

Not too long ago when I said the president's post will be contested some parties were quick to say NO. Someone care to explain now? I was told MAF changed their constitution and will see all positions contested for the coming elections.

"I was told about the plight of the athletes. I feel their pain."

Those were the words of Tengku Mahkota Johor Tunku Ismail Ibrahim.

I was given the opportunity to "menghadap" Tunku Ismail in Johor Baru on Sunday. We spoke about several things - from cars to football and him being on Twitter.

During the conversation, Tunku Ismail revealed he was recently approached to take over the Malaysian Athletics Federation.

HD says: It was a hectic yet fruitful day trip to Johor Baru.