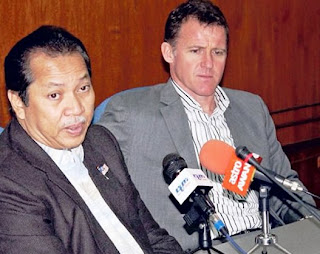 UPDATE 1.55pm: Just got off the phone with Peter Butler who is in Indonesia at the moment. Here is what he said:

"Let's get some facts straight. Firstly, I never walked out from Kelantan during my first stint. There was a clause in my contract stating Kelantan were to get back to me three months before my contract ended to notify me if they wanted to renew my contract.

So I left as I was told they wanted to see how I would fare in the Malaysia Cup before thinking of renewing my contact. I came back because despite leaving, Annuar Musa and I still kept in touch and were very amicable. He offered me the job as Kelantan will be playing in the AFC Cup. What I noticed is that I was not notified about important things including the hiring of players. I would only be notified if I asked. I do not have any problems with the management. Dato Afendi is a great guy, so is Tuan Haji Azman. I know the players were fully supportive of me as I have received text messages from them. But I was told, even by a prominent lady official, that someone hated my guts and hated the fact that I was a hit among the fans. Yes, I did leave amicably but I would like to put the record straight based on the accusations that has been hurled against me.

I am a respected man and a professional. If I feel there is a problem, I will not go and lambast someone on Facebook. I would instead call the person up and talk to him face to face. The picture of me and Azman you saw on Facebook, it was a current picture but the picture was taken just to tell the fans that we've patched up. Honestly, we didn't even talk about the issue.

Look, it is not my intention to put anyone down. I just want to put the record straight."

And in an email to me hours earlier, Peter ended the email by saying;

"I love that club (Kelantan) and the supporters they were great to me but they don't know the truth coz nobody has been brave enuf to stand up and speak the truth, he (Annuar Musa) hated the fact I stood up to him."

NOTE: This is to merely inform the fans of the episode in Kota Baru. Most have read Annuar Musa's comments in the past as seen on his Facebook page.

“Considering all the meddling and interference I thought I did a fantastic job against all odds….”

Those were the supposed words of former Kelantan coach Peter Butler.

I received a phone call from a journo yesterday. After a short conversation and several emails later, the journo sent a full text conversation between her and Peter about the latter's time with Kelantan FA (Kafa).

The journo could not use details of the conversation as her organisation feared of the possible legal implications.

After reading the details, I am forced to agree.

Peter had used 'strong words' against Kafa president Annuar Musa. The Englishman has apparently “kept all conversations on tape and all text messages”.

It was also stated Peter and current coach Bojan Hodak do not enjoy a cordial relationship.

However, Peter seems to have a soft spot for several officials.

"The management at Kelantan were decent towards me, Dato Afendi of FAM is a good man, Haji Azman a good guy..." the statement read before Peter continued to lambast Annuar Musa, adding the former politician had used "

I’m rather baffled over the sudden outburst by Peter since both parties had agreed to the terms of the termination.

But that doesn’t seem to be the case based on the statement I received. And it looks like the spat has turned personal - an epic match between Peter and Annuar Musa.

Let’s meet up for coffee and we can go through the “tape conversations and text messages” you have. Perhaps I can then get a clearer picture over what exactly transpired between you and Annuar Musa in Kota Baru to better inform both readers and fans of this episode.