"This is not an attack on the police" 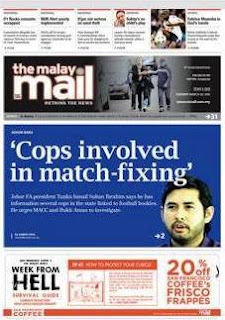 UPDATE March 21, 2012 11.06am: A Johor Football Association official has been detained for alleged involvement in match-fixing in the state.

Sources said the woman, alleged to have links to certain bookies, was remanded for seven days to facilitate police investigations.

They said police were also investigating claims that she was closely linked to a police officer from the anti-vice and gaming division.

Tengku Mahkota Johor Tunku Ismail Ibrahim had via his tweet on Saturday said "D7 officer is one of the bookies in JOHOR. Also involve in other crimes."

Instead of just relying on the tweet, I had to clarify and was given an opportunity to "menghadap" Tunku Ismail for an exclusive interview in Johor Baru on Sunday before he leaves for Argentina tonight. The young prince, who is also the Johor FA president, spent close to two hours as we spoke about his claims.

Tunku Ismail said he has "done his research" prior making the statement and knows many may not be happy with it.

Obviously many will not be happy especially after Inspector-General of Police Tan Sri Ismail Omar announced only one per cent of the the 120,000-strong Royal Malaysian Police were 'corrupt or involved in immoral activities'.


But he was quick to say this was not an attack over the police.

"I'm not a politician. I speak the truth."

Read all about Tunku Ismail's revelation in today's The Malay Mail.