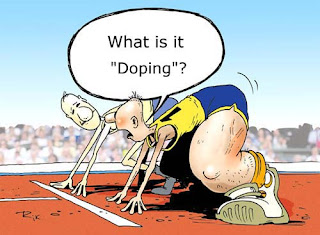 UPDATE March 14, 2012: OCM, at its board meeting yesterday, decided to write to MAF seeking for an explanation. More in today's Mailsport.

This is about the Malaysian Athletics Federation (MAF) doping fiasco.

I find it difficult to comprehend that no party can take action against the national body for its failure to disclose vital information as seen in a report it compiled on Sept 12, 2011 which was then handed to the president on Sept 27, 2011.

1. The National Sports Council are merely the funding arm of the Sports Ministry and have no jurisdiction over national sports associations. They can only withhold the allowances or sack their salaried coaches and withhold expenses for the training programme especially for the elite athletes.

2. The Sports Commissioner's Office can only take action against administrative flaws by the association.

3. The IAAF and Wada, despite emails to them, have yet to respond.

4. But I browsed through the Olympic Council of Malaysia's constitution and saw Article 6 and Article 10.

Article 6 (Powers), 6.16 states: “To take disciplinary action against a member or an athlete or an official of OCM who acts in breach or in violation of any of the provisions of the OCM’s constitution”.

Article 10.1.5 (Members’ Obligations) reads: “ ... comply with the World Anti-Doping Agency (Wada) Code to continue to be a member of OCM”.

And the words of OCM secretary Sieh Kok Chi:

“Personally, this situation has been badly handled. It has been allowed to drag on for far too long without any solution or closure.”

Here are my questions.

1. The Malay Mail in its expose on May 27, 2011 revealed the sprinters admitting to a high ranking NSC official that they were asked to take "pink pills". Was there any investigation done towards the claims then?

2. Several officials were interviewed by an MAF panel chaired by R.Annamalai. They include NSC's liaison officer for athletics M.Magendran and head of Adamas Nishel Kumar. Being stakeholders, did they question or demand for the full report? Or did they forget about it? Or was it a situation they asked but MAF buat bodoh?

3. Why didn't the interview panel - who included the likes of Mumtaz Jaafar, P. Solomon, Prof Rabindarjeet Singh and Ismalina Ismail - did not ask who actually supplied the pills (besides the herbal pills by a former national athlete) and who PAID for the pills?

HD says: The average guy don't rock the boat, 'cause he wants to climb aboard it. - The Rum Diary.