Who will be the new coach? 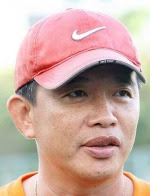 Meanwhile, MHC concluded the coaches - Tai Beng Hai and his assistant Nor Saiful Zaini will be retained as reported here.

All this in a span of two days.

Maninderjit, or better known as Mike, is believed to have left MHC to pursue his education.

Beng Hai, meanwhile, must certainly be disappointed over the team’s failure to book a berth in the London Olympics.

Some journalists have plenty to say about the duo. There are times they avoid members of the Media by not answering phone calls or simply shying away - as seen here.

I’ve known Mike since his playing days and even better when he coached SMK Sri Hartamas with Minarwan Nawawi in the KL U-16 league some 10 years ago. We do still communicate as and when needed.

As for Beng Hai, well we have bumped into each other now and then, but not as much as I had hoped for.

To Mike, all the best in your education.

To Beng Hai, not many would have the guts to do what you did – to quit – since we’re surrounded by power-crazy individuals. All the best to you too.

The next question – who will fill in Beng Hai’s shoes?