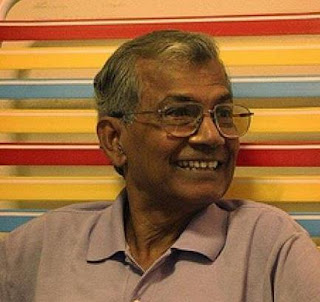 "And one teacher who is close to the hearts of hundreds of thousands of Johannians is Master Vincent Fernandez. Besides being a Physical Education teacher and the sports secretary of the school, he also coached the St. John's Institution hockey team.Master Vincent is a true 'green' Johannian, having studied in the school from 1949 to 1957 and returned to the school to start his teaching career in 1963 and retired in 1997.Master Vincent also has been doing sports commentary with Radio 4 (now Traxx FM) since 1963. He started with four minutes of sports roundup between 9.25pm and 9.30pm daily, before a longer time slot was dedicated to sports through Arena Sukan.He is also one of the founding members of the Sunday Sports Talk on Traxx FM."

That was taken from the blog posting To Sir With Love, written by former The Malay Mail sports editor Tony Mariadass in 2009. Tony once again writes about his memory of Vincent in his latest posting here.

The younger generation will know Vincent's children especially Johan (known as JJ on HitzFM) and Zabrina (who with her partner Joe Jer won the first Amazing Race Asia).

Vincent's final tweet was on Feb 28 and it read;

"As Fri approach, alot run through the mind. Tumour is at the lower throat, intestines and part of the liver. Thanks all for your prayers."

I received a phone call from Tony about the passing of Master Vincent Fernandez (pic) today.

Those wanting to pay their last respect can do so at his house at No.32 Jalan Limau Purut, Bangsar as his remains will be laid to rest at the Kiara Muslim cemetery by noon tomorrow.

May his soul rest in peace.