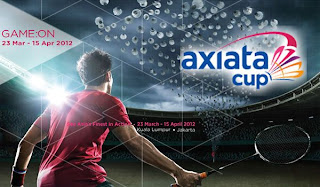 So how true is the supposed Axiata-Celcom tiff?

It all started with this commentary by The Star's Kng Zheng Guan - Poor timing and planning take the shine off inaugural Axiata Cup meet - which was published March 28, 2012.

Obviously it offended certain people and the funders threatened to "pull out" their adverts in the daily. I was told it was worth RM1 million or so.

This led to a "damage control" piece by The Star's sports editor R.Manogaran - Axiata Cup on right track to become a prestigious event - as seen here.

Apparently there seems to be a "strained" relationship between certain folks in Celcom and Axiata Group Bhd. Many believe, The Star was used to get the message across.

In the paper business, it is either you get the typical "see you in court" or "I will pull out my adverts".

However, in this case I do hope the supposed 'tiff' is coffee shop talk.

For a better understanding of the Axiata-Celcom relationship, kindly click here.

Perhaps the timing of the Axiata Cup is questionable with the hectic schedule and the Olympics around the corner, but I've said this before and I'll say it again - a tournament is always good for the sport. The more, the better.
HD says: Surfing the net using Celcom is quite good - and no I wasn't paid to say this.
axiata cup axiata group celcom