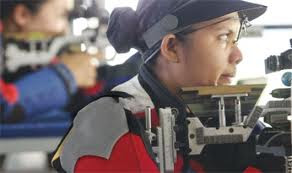 She has yet to step into London but the English Press are already writing about her as seen in The Daily Mail.

Nur Suryani, who I last met during the Sportswriters Association of Malaysia awards ceremony in Feb, is expecting her first born early September. This would mean she will be almost eight months into her pregnancy while competing in the Olympics.

And her chances of winning the gold medal?

"Oh, I don't think about that yet,' she added modestly. 'Anyhow, maybe they will say this is unfair because two persons shoot for one gold," she laughed, pointing to her bulge.

All the best Nur Suryani!