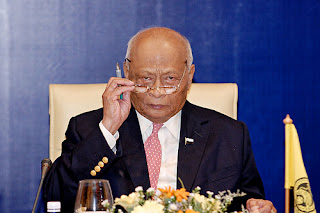 A bad law is still law.

Before anyone jump the gun, let me make it clear here that both the FA of Malaysia (FAM) president Sultan Ahmad Shah (pic) and his son FAM deputy president Tengku Abdullah are trying their best to diffuse the tensed (but rather comical) situation surrounding the FAM-Annuar Musa fiasco.
Tengku Abdullah is keen to correct the wrong - but sadly it gives the presumption that the executive can overrule the judiciary in FAM.

Sultan Ahmad, meanwhile, is right not to support his son's plans of trying to play mediator for he has to be seen supporting the decision made by the Disciplinary Board.

Now who is the clown (or clowns) that has (or have) placed Sultan Ahmad and Tengku Abdullah in such a sticky situation?

Here are my questions;

1) If a “review” means reexamining the DB’s decision, isn’t this interfering with the DB, presumably an independent entity?

3) Why wasn’t Tengku Abdullah privy to the details of the alleged incident or not informed about last week’s hearing?

4) Why wasn’t he, or the president Sultan Ahmad, advised about what was said and what really transpired to allow some form of internal mediation before dragging the matter to the DB?

6) Why didn’t anyone try to “review” the DB’s decision when it slapped coaches B. Satianathan and Reduan Abdullah with bans for merely speaking about fixtures in the M-League?

7) Why is the statute so draconian that one cannot appeal against a decision?

Read my commentary in today's Mailsport - A bad law is still law, unfortunately for more.

HD says: Let's be rationale about this whole matter and only then we will see who made the right decisions and who screwed up big time.
FAM football sultan ahmad shah tengku abdullah