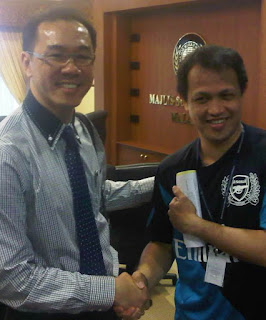 First national doubles coach Rexy Mainaky revealed he has taken up a job offer in the Philippines, as reported in today’s Mailsport.

It is a two-year contract with the Philippines BA as the coaching director where Rexy will be tasked to scout for talents across the archipelago.

Then it was learnt national doubles player Ong Soon Hock is also preparing to quit the national stable. He is apparently still in the midst of finding for sponsors but BA of Malaysia (BAM) has not received any ‘resignation’ letter from Soon Hock.

For the record, NST’s KM Boopathy had written about the possibility of the Rexy leaving for the Philippines in January as seen here.

Is Rexy’s departure a big loss to the national badminton scene?

Having started working for BAM since July 2005, one must not forget it was Rexy who paired up Koo Kien Keat and Tan Boon Heong who took the world by storm, winning the Asian Games gold medal in 2006 before winning the All-England title a year later as they were then paraded around during the Ijok by-elections.

But things have gone downhill for the duo in recent years. Rexy was deemed “not good enough” and was made into the women’s doubles coach instead.

Many saw this as a demotion – which I honestly don’t understand why since any department; singles, doubles, mens or womens are of equal standing.

Perhaps the shuttlers would know best if Rexy - who has threatened to quit on several occasions - is indeed the ideal coach that will sorely be missed. But as BAM secretary Ng Chin Chai said, "Life goes on".

“My biggest achievement … well there have been a lot of good things. My biggest regret is the shuttlers not being able to win the World Championships or an Olympic gold medal.

“BAM, the High Performance Team, the management, they have done everything for Koo and Tan. The chance is there (for them to win the Olympic gold) but it is up to them.”

HD says: Will Rexy lure any Malaysian coach to the Philippines?