Raja: We must win at all costs 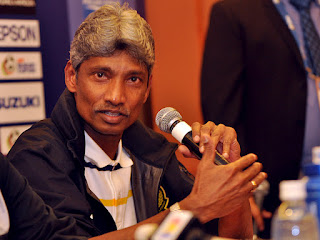 IT is obvious national coach K.Rajagobal (pic) is tired of speaking about Malaysia's 156 position in the Fifa ranking.

To silence his critics once and for all, he has demanded nothing less than a win from his lads as the Tigers take on Sri Lanka in an international friendly match at the Shah Alam Stadium on Saturday.

"It's simple, I've told the boys to focus on the match this Saturday and I want us to win. That's it," said Rajagobal firmly.

"I don't want to dwell about rankings and I don't want to talk about those questioning our capabilities. We have not lost a single match since 2012 and that's a fact."

Rajagobal added the training has been smooth sailing as he plans to try out several faces. It is a crucial year for the Tigers as they gear up to defend their Asean Cup title in December.

This will be Malaysia’s seventh meeting with the Sri Lankans since the Merdeka Tournament in 1972 as the Malaysians have won five out of their six previous outings.

HD says: All the best to Rajagobal and his lads.
football K.Rajagobal Malaysia sri lanka