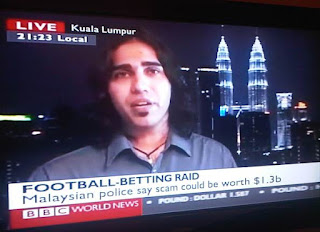 Selangor police, had on Thursday, shut down a multi-billion ringgit international gaming syndicate in Kajang.

This led to my live interview with BBC yesterday.

I've been writing about football betting for quite sometime and even remember when the government was first keen to issue Berjaya's Ascot Sdn Bhd football betting licence but only to retract due to opposition from the opposing political parties and certain quarters of the masses. Clearly, Berjaya boss Vincent Tan wasn't too pleased, as seen here.

No proper study was done on the matter. The opposition managed to use it as a political tool to serve their agenda.

The same was seen when a cargo from Israel docked at Port Klang recently. Opposition supporters protested but wasn't Anwar Ibrahim aware the government relaxed the the law with regards to trade with Israel-based companies during his time as Finance Minister? Read here for more.

Back to football betting;

1. Lottery and 4D outlets are everywhere in the country. Do calculate the number of Special Draws conducted this year and last year.

2. There are several casinos in Genting Highlands in Pahang.

3. Berjaya owned SportsToto hands out about RM50 million annually to the National Sports Council - the funding arm of the Sports Ministry.

Money will be circulated within the country, minimising the 'illegal' outflow of RM and this will in return strengthen the RM. Didn't Prime Minister Najib Razak once revealed the country lost RM888 billion due to the illicit outflow of RM?

Just compare the RM with, let's say, the Singapore Dollar today and what it was 10 years ago.

Since we live in a 'subsidised country' the government will be able to generate income through sin taxes. It is an open secret that the government makes the most from entertainment and sin taxes due to the high taxes imposed.

There is the argument of religious sensitivity and also the government seen as consenting to gambling. I believe my first three points say it all.

But a proper study needs to be done, if legalising football betting will indeed minimise the outflow of RM and curb the menace in the country.

As I said on BBC, football betting is a disease not only in Malaysia but throughout the region and beyond.