What can sports officials learn from Bersih 3.0? 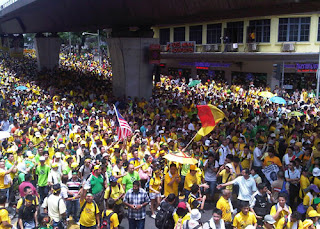 UPDATE: An influential weapon - From the Sidelines.

-------
I was at a function over the weekend when a government official admitted he was surprised to see the huge turnout for the Bersih 3.0 rally in KL.

"There was no publicity in the newspapers and yet the organisers managed to gather so many people."

I smiled and said;

"They don't need the newspapers anymore. Twitter, blog and Facebook is good enough to create such an impact."

It's sad that as a true blue newspaper man, who still enjoy getting my fingers dirty with ink flipping through the pages of a newspaper, I have to admit that social media is where the masses especially the youths read up and disseminate information.

We knew about it - even before the 2008 elections. Yet, the old-timers- till today - don't take it seriously.

Prime Minister Najib Razak even made an announcement recently that candidates on Twitter more likely to be selected for the coming General Election.

Sadly, many - especially in sports - still disregard the use of social media platforms.

Do the FA of Malaysia or the BA of Malaysia - the two biggest sporting organisations in the country - engage with the Media and fans through Twitter? Don't they just post selective feel-good articles from the Press onto their websites?

How many state football associations have a strong online presence?

If a coach is in the midst of a tournament abroad, the Media officer of the respective organisation need to only spend 5 minutes with the coach after the match, get his general thoughts, and blast it out through social media. Information is handed out by the organisation - minimising any situation of any individual being "misquoted".

Wouldn't that result in a win-win situation for all?

Also online platforms focus on the specific crowd so you are certain your followers will be those interested in the sport your administer or promote. The organisation will then be able to monetise their pages as sponsors are assured of the consistent traffic that visits your social media platform.

Now imagine a platform where one can 'video-tweet' and engage with millions across the world in real time?