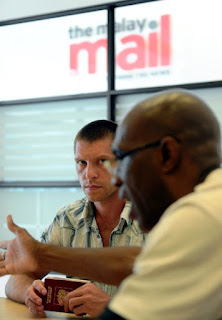 Pahang's Russian striker Eduard Sakhnevich (pic left) has lodged a formal complaint to FIFA and FA of Malaysia (FAM) after his services were "terminated" by Pahang FA on April 10, 2012.

Eduard insisted there was NO mutual agreement to terminate the contract.

He has, through his agent Ricky Swen Jr (pic right), lodged a police report in Kuantan alleging he was "cheated" as he believed an undated letter was slipped into the contract which Eduard signed and is now believed to be a "termination letter" by the Russian.

The Russian also claims he, his wife and two sons were "terrorised" and forced out of their house in Kuantan by Pahang FA general secretary Fuzzemi Ibrahim and "another man" who he doesn't recognise.

He has only been paid for February and March. He now wants the full payment of wages as his contract ends on Nov 30. Eduard has no idea why he was terminated despite scoring four goals in five Premier League matches for Pahang.

Ricky stressed his client only wants what is owed to him and gave the example of Australian Michael Baird who was terminated by Sabah FA but received full payment.

I gave Pahang FA an opportunity to counter the allegations. Sadly, they were not forthcoming.

Fuzzemi, when contacted, asked me to speak to assistant team manager Zainal Abidin Hassan who is said to know the "whole situation better".

And when I spoke to the former international, he said "it's an administrative matter and those sitting in the office should be answering such questions".

Pick up a copy of The Malay Mail for more details.

HD says: Can we really call the M-League a professional league? Seriously?