Another headache for LCW? 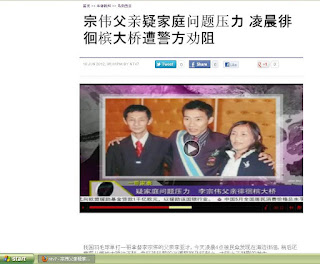 According to NTV7's Mandarin news, Lee Chong Wei's father had apparently tried to commit suicide only to be stopped by the police.

The news can be viewed here.

Police on Sunday foiled two attempts at suicide by the father of a national athlete.

The 59-year-old man is said to have tried to have taken his life near the Queensbay shopping mall in Bayan Lepas early Sunday but police who coaxed him out of it.

If true, this is another blow to his Olympic preparation as the Penangite is still recovering from an ankle injury sustained during the recent Thomas Cup.