"I never ever gave to any athletes any banned substance"

June 14, 2012
Yunus and several coaches and athletes said in a sworn statement that MAU deputy president Datuk Karim Ibrahim had arranged for a Bulgarian doctor to provide him with “pills that could help me win gold at the SEA Games". 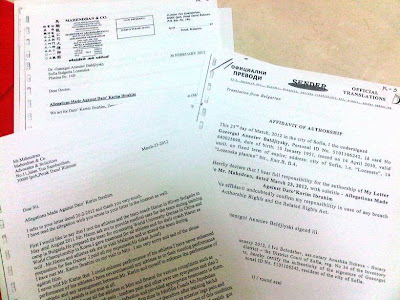 That was taken from The Star in February.

The Bulgarian doctor, Gueorgui Ananiev Baldjiysky, had in a sworn translated letter dated March 23, 2012 refuted the claims by relay runner Mohd Yunus Lasaleh, who failed a dope test after winning gold at the Indonesia SEA Games.

Below is the translated letter by Gueorgui as produced to the investigation panel headed by former Court of Appeal judge VC George.

Allegations Made Against Dato' Karim Ibrahim

I refer to your letter dated 20-2-2012 and thank you very much.
I have read the allegation which you wrote in your letter and in the internet as well.

First I would like to say that I met the athletes and the team coach Harun (Rasheed) in Sliven, Bulgaria in May until August 2011. Mr Harun ask me to provide medical care for the team during training camp in Bulgaria. He prepared the team for the on-coming World University Games in China and World Championship in Korea. I gave treatment for all athletes and for their coach Harun as well. Mr Harun and athletes ask me to visit Malaysia and to attend the team during preparation for Sea Games. I paid all my expenses (Air ticket, hotel).

I have attended to almost all the athletes in Miri and Brunei for various complaints such as legs pain, muscle pain, low back pain, tendons pain and other over use symptoms and also 2 or 3 incidents of food poisoning, virus infection and provided appropriate treatments to them. With regards to Mohd Yunus Lasaleh, I met him first time in Miri. His coach Mr Jayabalan introduced him to me. The track in Miri was very hard and therefore after training Mohd Yunus such as other athletes complained some over use symptoms as anterior legs pain and tendons pain. With his coach Mr Jayabalan we discussed the best management of this condition including change of the training program and adequate medication. Mohd Yunus Lasaleh got treatment including anti-inflammatory, muscle relaxants multi-vitamins pain relieving medication also physiotherapy was recommended with team physiotherapist. I personally paid the entire medication and informed Mr Jayabalan accordingly and I gave strict medical treatment to Mohd Yunus like I gave to all other athletes. I also gave treatment to Mr Jayabalan for his lateral elbow pain including local injection with Lidocain 2% 2ml and Diprofos 1ml.

I would like to repeat again, I never ever gave to any athletes any banned substance, not only in Malaysia but throughout my entire practice as a sport medicine doctor. I have never got any benefits financially or otherwise from the athletes coaches or the association.

I am very sad that some of the coaches and athletes to whom I have extended my services and financial aid have abused me with such deplorable allegations that I gave banned drugs to the Malaysian athletes.

The Malaysian athletes do not appreciate my contribution and I don't wish to come in Malaysia at this juncture of time. BUT, if the inquiry is held in Bulgaria, I will come and give my evidence and clear my name in Bulgaria.

Mr. Mahendran, please forward this letter to the inquiry committee and the President of Athletic Federation Malaysia and any other party concerned.

Thank you.
Note: The letter was in response to Karim Ibrahim's lawyer Mahendran Arasaradnam's letter dated Feb 20, 2012. The response letter by the doctor was attached with an Affidavit of Authorship although the translated version (in English) only bore Gueirgui's presumed signature. No stamp or other markings of a third party or that of the official translator was seen on the English version of the letter.

HD says: Who's telling the truth?