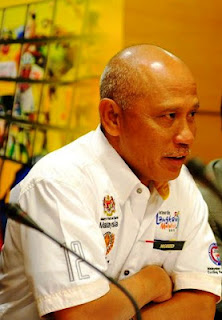 Apparently he was supposed to be the Sports Medicine Division Director on June 15.

The letter was said to be signed by Sports Ministry's secretary-general Mohid Mohamed (pic), who apparently felt a little "cold" when he was called as a witness in the first day of the National Sports Council-Mesuma case (tiger-stripe issue) at the Jalan Duta courtroom yesterday.

It is learnt that Dr Yeo Wee Kian has been asked to stand in as the temporary CEO.

He believes he is still the CEO until he receives a direction from the Sports Minister, Ahmad Shabery Cheek, as stated in the NSI Act 2011.

However, Ramlan believes he has "not exhausted all options."

It remains unclear to why Ramlan is being ask to vacate the seat for there has not been any memo or warning letters issued. This has been on-going for several months as exposed by this blog here, here and here.

HD says: Can we get this done and over with? Mr Minister, takkan nak dok membisu je? Either keep him or sack him. Period!
ahmad shabery cheek Dr Ramlan Aziz mohid mohamed National Sports Institute