Lee's Complicated 'Wei' to the Olympics 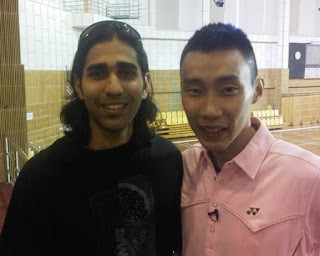 UPDATE July 1 12.30pm: Pandelela is young and has been excellent in her field of sport. I met with the Olympic Council of Malaysia (OCM) and we decided that she is the best candidate for the job,” said (Tun Ahmad) Sarji after visiting the Olympic-bound shuttlers at Stadium Juara in Bukit Kiara yesterday.

That was taken from The Star's report.

"As far as I can recall, the selection of the flag bearer was not discussed or approved during the OCM Board or Council meetings.

"In the past, we will usually discuss such matters. Recommendations can be made but the  (OCM) members will decide on such matters," added Kok Chi.

It was a lunch session hosted by top national shuttler Lee Chong Wei at the Juara Stadium in Bukit Kiara on Thursday.

Chong Wei was at his candid self but drew a serious and determined look when asked about his Olympics preparation which has been surrounded by an injury and family issues.

Yesterday, SS Dhaliwal had posted this on his blog;

When told that he was not picked as the flag bearer, Chong Wei looked up and was seemingly calm in his reply though one could not help notice the tinge of sadness in his eyes as he replied;

"That is their decision and what can I say. But I do hope they let me march at the opening and my Olympics will not be complete as I have never been to the opening ceremony be it at Athens (2004) and Beijing (2008).


And this brings up the question, was this payback from NSC for Chong Wei being absent from the National Sports Awards earlier this year which irked Zolkples?

Those unsure what the 'payback' is, read here.

And the picture below was taken from today's The Star.