The fate of the President's Cup


A youth tournament which is believed to unearth talents and as a stepping stone before the players graduate into the professional circle, the President's Cup does not get the attention it deserves.

In fact, it is hardly on the radar that makes it easier for bookies to approach the youngsters in a bid to fix matches. Sad but true.

Then we have teams who fail to pay their players' wages on time. It is not like these President Cup footballers are making millions.

Read more in Sinar Harian and The Star.

It was disappointing to note that even the FA of Malaysia did not have any write up about the final. Instead, it was just a headline that read Perak Juara coupled with the score line as seen here. 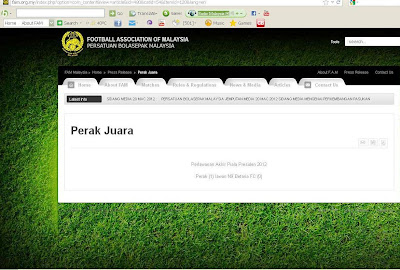 Hopefully more attention will be given to the President's Cup tournament. After all, these are the players that go on to be the next stars of the country.