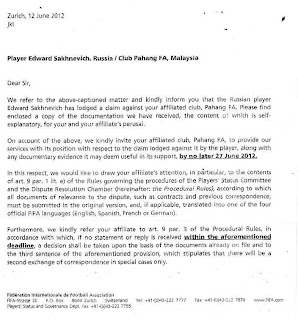 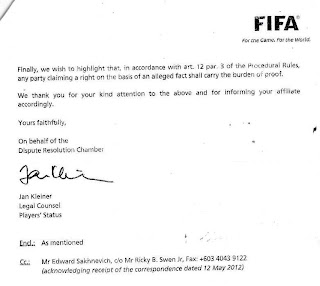 The world body wrote to the FA of Malaysia (FAM) three days ago seeking for Pahang FA to provide "documented evidence which will be deemed useful" not later than June 27, 2012.

If Pahang FA does not reply by then, "a decision shall be taken upon the basis of the documents already on file..."

The letter by Fifa bore the signature of the players' status legal counsel Jan Kleiner.

It remains unclear if FAM have forwarded the letter to Pahang FA.

Eduard lodged a formal complaint to FIFA and FAM after his services were "terminated" by Pahang FA on April 10, 2012.

Eduard insisted there was no mutual agreement to terminate the contract. Eduard's claims was reported by the author in April as seen here.

Former Sabah player Jeremy Danker is still waiting for his wages owed despite having lodged a complaint with FAM as seen here while KLFA have finally promised to pay up all wages (two months) owed to its players by the end of the month as seen here.