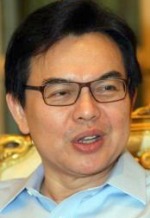 Typically after any shortcomings or failure, the easy way out is by demanding the head of the chief running the show.

Some self-proclaimed leaders are better off being mere sidekicks.

But what about the Badminton Association of Malaysia (BAM)? Let's not kid ourselves as we all knew from the beginning that the national team will struggle in this year's Thomas Cup. And now even the chances of winning the elusive gold medal at the Olympics is slowly fading away.

The question that everyone seems to ask right now is if BAM president Nadzmi Salleh (pic) should quit. After all, Nadzmi who first joined BAM believed in the Japanese way of life when it comes to accountability and transparency. In short, he believes if one cannot deliever, one should go.

BAM deputy president Al-Amin Majid seems to be the likely candidate to take over.

Even former Bernama editor-in-chief Azman Ujang took a swipe at Nadzmi in his column 'What now after Wuhan' published in The Sun several days back, as seen here.

Azman, who had a chat with former BAM supremo Elyas Omar, quoted the former mayor as saying;

"Enough damage has been done to Malaysian badminton. BAM is lost in the wilderness as the leadership is weak. Badminton needs a leader to pull us out of this."

Nadzmi disclosed to Azman that in the last two BAM annual general meetings, he had declined to stay on as president but the association's council persuaded him to continue.

"Finally, I suggested for two deputy presidents for a smooth transition when I step down."

My question - as I raised during Agenda Awani on Astro Awani (501) yesterday - is that will a change of leadership see a change in the standards of badminton?

With the current standards, set of players and situation - we may not be able to achieve the gold medal in London and there may not even be a podium finish at the 2016 Olympics in Brazil.

We should just focus on 2020, focus on how to create a larger pool of talents and continue to mold such talents. We must be a factory - to continuously churn out talents without any disruption.

It will be difficult to find another gem like Lee Chong Wei. As I said on the show, the Penangite is a freak - in a good way.

But the gap between the other players need to be tighten. Then again, haven't the Media been harping about this for many years?

Then again, we have the many high performance directors and the many other officials who are experts in the field. I am sure they know what is best for the nation - or do they?

Changing the heads will not mean a thing if there is no strong foundation and support at the lower levels.

If BAM and the stakeholders especially at the States are game for a change - the first thing they need to do is to change their attitude.

Then again, will all of this be forgotten if Chong Wei returns from London with the Olympic gold medal around his neck?