Thank you and goodbye....for now 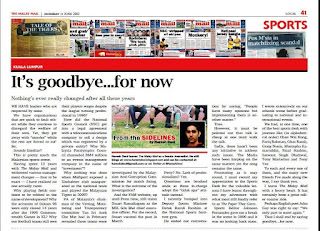 It was just slightly over a year ago when I met Al-Amin Majid at his office in Damansara. To some Al-Amin is the deputy president of the BA of Malaysia. To me, he is also the director of The Malay Mail.

The meeting was supposed to be about the front page story I had written on a former national sprinter that was being investigated by the Malaysian Anti-Corruption Commission but we ended talking about other things naturally.

One thing I remember clearly from that discussion was when Al-Amin said;

"If you have nothing nice to say about somebody, it's best not to say anything."

With that in mind, I shall leave you with my final column in The Malay Mail - for now.

For the record, my final day as Senior Journalist with The Malay Mail is on June 13, 2012. I was forced to rethink my position within the company and leave with a heavy heart.

My sincere appreciation to Johnson Fernandez and Chan Wai Kong who interviewed me and gave me a break in 2000 and to the clan; Fariq Rahman, Ghaz Ramli, Graig Nunis, Mustapha Kamaruddin, Rizal Hashim, Satwant Singh Dhaliwal, Tony Mariadass and Tony Yee.

Also a big thank you to our brilliant designer Raven who placed my old articles above the column.

It will always be The Paper That Cares in my eyes.


From the Sidelines with Haresh Deol

WE HAVE leaders who are respected by none.
We have organisations that are quick to fault others while they continue to disregard the welfare of their own. Yet, they get away with “murder” while the rest are forced to suffer.
Sounds familiar?
This is pretty much the Malaysian sports scene.
Having spent 12 years with The Malay Mail and withstood various management changes — four to be exact — I have realised no one actually cares.
Why playing fields continue to be robbed in the name of development? Why the accounts of Sukom 98
were only closed 14 years after the 1998 Commonwealth Games in KL? Why our football teams still owe their players wages despite the league turning professional in 1996?
How did the National Sports Council (NSC) get into a legal agreement with a telecommunications company to sell a design which was registered by a private entity? Why Malaysia Paralympics Council channeled RM4 million to an events management company in the name of “investment”?
Why nothing was done when Mailsport exposed a Zimbabwe club masqueraded as the national team and played the Malaysian Tigers in 2009?
FA of Malaysia’s chairman of the Vetting, Monitoring and Transparency committee Tan Sri Aseh Che Mat had in February revealed three teams were investigated by the Malaysian Anti-Corruption Commission for match fixing.
What is the outcome of the investigation?
And the FAM website, up until Press time, still states Stuart Ramalingam as the MSL Sdn Bhd chief executive officer. For the record, Stuart vacated the post in March.
Petty? No. Lack of professionalism? Yes.
Questions are brushed aside as those in-charge adopt the “tidak apa” attitude instead.
I recently bumped into Deputy Sports Minister Datuk Razali Ibrahim at the National Sports Institute gym.
He ended our conversation by saying; “People have many opinions but implementing them is another matter.”
True.
However, it must be pointed out that talk is cheap as one must walk the talk.
Sadly, there hasn’t been any initiative to address such issues. The Media have been harping on the same matters yet the song remains the same.
Frustrating as it may sound, I must record my appreciation to the Sports Desk for the valuable lessons I have learnt throughout my adventure with what most still fondly refer to as The Paper That Cares.
Sports Editor Johnson Fernandez gave me a break in the scene in 2000 and it was no looking back since.
I wrote extensively on our schools scene before graduating to national and international events.
We had, at one time, one of the best sports desk with journos like (in alphabetical order) Chan Wai Kong,
Fariq Rahman, Ghaz Ramli, Graig Nunis, Mustapha Kamaruddin, Rizal Hashim, Satwant Singh Dhaliwal,
Tony Mariadass and Tony Yee.
To each and every one of them, and the many new friends I’ve made along the way, I say thank you.
I leave The Malay Mail with a heavy heart. It has certainly been a great roller coaster ride.
Perhaps English poet John Gay was right to say: “We only part to meet again.”
Thus I shall end by saying goodbye...for now

Haresh Deol leaves The Malay Mail as a Senior Journalist. He still blogs at www.hareshdeol.blogspot.com and can be contacted at hareshdeol@gmail.com or on Twitter at @HareshDeol