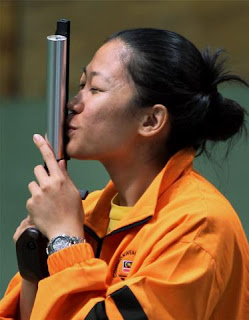 In 2007 national shooter Bibiana Ng (pic) - together with Joseline Cheah and Siti Nur Masitah Mohd Badrin - were slapped with a two-year ban by the International Sport Shooting Federation after testing positive for the banned drug Propranolol in March.

Three years later, Bibiana returned to the scene with a bang after shooting down the gold medal at the 2010 Commonwealth Games.

And yesterday, the lass rewrote her own national record after scoring 538 points in the 25m pistol women's individual event at the 36th SEASA championship in Subang. Read more here.

She had set the national record of 537 points four years ago.

It is indeed amazing to see how athletes bounce back from an ugly episode to silence their critics and win accolades.

Bibiana has done it, yet again, and she is indeed an inspiring story to not only shooters but athletes alike.

Here's hoping to see Bibiana hog the limelight in the near future. With such grit and determination, she deserves it.