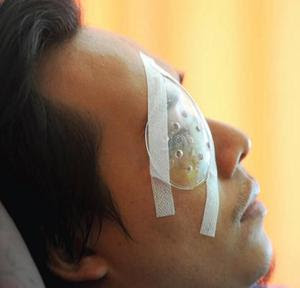 A former graphic designer has filed a suit for RM776,000 against the Football Association of Malaysia (FAM), claiming that its negligence caused him to lose his right eye and his income.

Ahmad Jazimin Mohd Jalaludin (pic) was at the football match between Malaysia and Singapore football at the National Stadium in Bukit Jalil, organised by FAM on July 28 last year.

He said that at about 8.45pm, a firecracker from the spectator seats had fallen and exploded by his right eye, causing him to suffer serious injury.

Read more in The Star today.

Read my previous articles on the incident as seen on Yahoo! Malaysia, lowyat.net and a posting on this blog FAM risks sanctions?