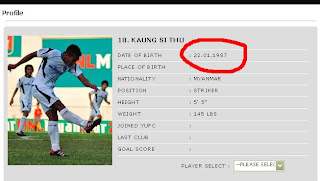 A screen shot of the first picture (from the top) was taken on Tuesday.

The screen shot of the picture below was taken yesterday. 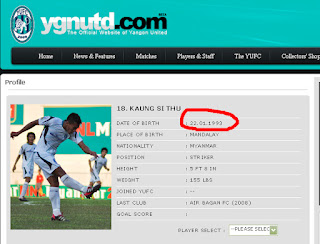 of the Under-22 AFC Cup - is "younger" than what he was prior the competition.

The first date of birth states he is 25 years old but the second profile sees Kaung being a "19 year old".

Also, now we know where Kaung was born - in Mandalay.

A mistake by the webmaster? You be the judge.

Meanwhile, the FA of Malaysia (FAM) have lodged a formal complaint to the Asian Football Confederation (AFC) over Myanmar's alleged use of "over-aged' players - including Kaung and Thet Naing - in the qualifying rounds of the age-group tournament in Yangon. This despite AFC said; "According to the documents registered with us, these players are eligible (age-wise) for the tournament." as seen here.

This reminds me of 2009 when the I exposed a Zimbabwe club masquerading as the national team during two friendly matches against our national side as published here. FAM maintained they cannot question the validity of the players as they "respected" and "trusted" their counterparts in Zimbabwe despite the evidence by the author.

One gets the feeling karma bit FAM back this time around eh?

And here's what national Under-22 coach Ong Kim Swee has got to say;

"I would like to stress that we are not lodging a complaint just because we lost (2-1) to Myanmar. I've stared at defeats before especially during our Olympic qualifications and I don't make up excuses or run away from them.


But this cannot be going on. Fifa talks about Fairplay but where is the fairness in this tournament? I am afraid, very afraid that if nothing is done and Myanmar are allowed to practice such manipulation, then they will definitely do the same when they host the Sea Games next year.


Imagine if we were to field Safee Sali, Khairul Fahmi (Che Mat) and Norshahrul (Idlan Talaha) for the Sea Games next year. I'm sure many countries will make noise. The boys played hard in this tournament (AFC Cup Under-22 qualification) and it is unfair to them. We just want it to be a level playing ground, if it is an age-group tournament, then the age-group should be respected."