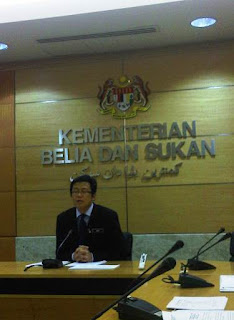 That could be a reality judging by the initiative of Youth and Sports deputy minister Gan Ping Sieu (pic).

Being the only Media representative at Wisma KBS in Putrajaya yesterday, I was privileged to listen and share my views on ways the government can aid sports entrepreneurs and enthusiasts expand our current sports industry.

Ideas proposed during the meeting will be considered before they are incorporated in the 2013 Budget which will be announced in September.

Many at the meeting shared one thing in common - wanting funds from the government.

Many shared their views and some were rather emotional, forgetting the subject of the meeting. Nevertheless, Ping Sieu was quick to add "he appreciated the feedback" as it was an "eye opener".

I suggested several items that could be part of the 2013 Budget.

1. Tax reliefs or incentives for financial institutions that hand out soft loans to young sports entrepreneurs and those wanting to organise tournaments. This will ensure organisers and entrepreneurs will work hard to pay back the loans instead of taking the easy way out by expecting hand outs by the government.

I strongly believe government money should go back to the Rakyat. I would like to know how the average child in my neighbourhood will be able to benefit from the Youth and Sports Ministry instead of just the elite few.

2. Taxes on foreign athletes be looked into. In fact, this was first brought up by Westports KL Dragons general manager Yakub Hussaini.

3.  Ministry should educate masses - companies and individuals - over the available sports tax reliefs.

I was taken aback when a representative from Maybank admitted that he did not know that companies enjoyed tax reliefs when sponsoring sports events. Several other representatives from other establishments were also in the dark too.

Many were also surprised there is a RM300 rebate for individuals who buy sporting equipment as listed in the Sports Development Act 1997.

A basketball operator in KL who hails from Iran said;

"Msia Sports Ministry just spend $ on many things but no results, just my opinion."

Micheal's Badminton Academy questioned why MyCEB denied their application for grants to host a badmiunton event featuring 800 players from across the globe.

And Ping Sieu had during the meeting said;

"Private investors are welcomed to take over our sporting facilities & ensure it is run professionally."

It must be pointed out that most of the discussions and opinions were beyond the jurisdiction of the Sports Ministry. Ping Sieu, nevertheless, assured that they will bring this matter up with the relevant Ministries.

It remains to be seen if the Ministry will be able to ensure the 2013 Budget will be sports friendly.

However, the initiative to gather and host individuals from various backgrounds ought to be applauded.