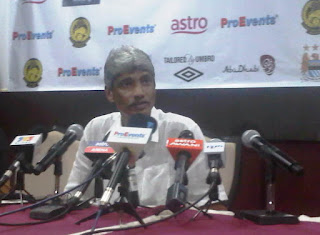 Players have their ups and downs. National coach K.Rajagobal (pic) can attest to that.

He credited Gary Steven Robbat for putting up a good show and praised defender S.Subramaniam, among others.

But he placed his faith in national striker Safee Sali.

"I think he is professional enough. He tried (to score). I believe he played better (against Manchester City) than the Arsenal match," said Rajagobal.

"Playing with strong teams..there are more positives. We can see the improvement. At the South East Asia region, we should be able to be competitive.

"But we need to work on our strike force...which can improve."

The match was played on a poor pitch. Two Manchester United banners made their way to the stands only to be removed and there was a Red Devils fan among the sea of blue who was eager to hog the limelight as he was interviewed by numerous TV stations.

Even the English Press took a swipe at the poor conditions of the field as seen in The Daily Mail.

With the heat such a factor and the pitch here so poor that parts of it had to be relaid in the hours before kick-off, City manager Roberto Mancini will have been relieved to get through the 90 minutes without suffering more injuries to that sustained by captain Vincent Kompany in last Friday’s win over Arsenal in China.

The UK's Mirror, meanwhile, said Malaysia were of little competition for the visitors;

Against modest opposition, City were never in trouble, controlling the tempo of the game in what amounted to little more than a training exercise for Roberto Mancini's players.

Manchester City's Roberto Mancini was pleased with the Asian Tour, adding he still has another two weeks before the English Premier League season begins.

And just before Mancini left the Press Conference, he said;

"Thank you all, goodbye and see you next year."