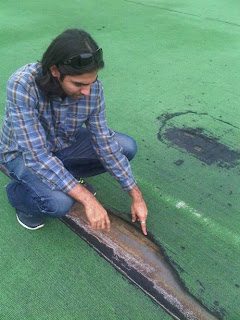 I received a tip-off recently regarding the poor conditions at the Tunku Mahkota Ismail Sports School in Bandar Penawar, Johor.

I felt it was only right to visit the school which was formerly known as the Bandar Penawar Sports School. Accompanying me was Astro Awani's sports editor Fadzrie Hazis.

The tip-off turned out to be true. This was my observation;

1. Hockey turf (pic 1)
- There is only hockey turf in the school which is shared by both the boys and girls teams. The turf is in bad shape as evident in the picture and the condition started becoming worse since last year.
Despite such shortcomings, the lads won the Malaysian Junior Hockey League this year. 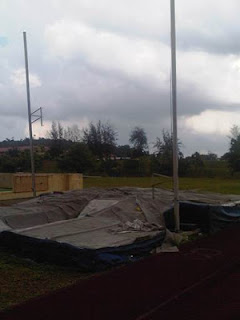 - it is damaged and judging by the looks of it, it has been left to rot for sometime. When asked, a worker said it has been not used for "almost four years".

3. Lawn bowls pitch (pic 3)
-  They have lawn bowlers but no coach and no proper pitch as the one at the school is in bad condition. It was later learnt the school athletes train at the Johor Baru Sports Complex, an hour's drive away.

4. Squash courts (pic 4)
- The school has three squash courts but all three are not in working order. The bottom wooden panel of the first squash court from the entrance is rotting. There is a table tennis table in another squash court. Apparently there are no more squash players in the school due to the unavailability of coaches. 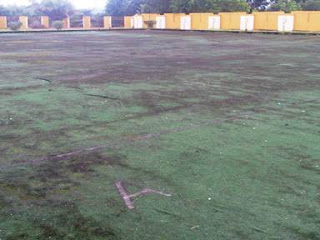 Among the other observations include;
- Lack of security. Strangers are able to waltz in and out of the school compound with ease. This could put the school children at risk.

- Football field is not in a good condition.

- There is a big 'Makmal Analisis Pergerakan' which apparently has not been fully utilised since it was built. 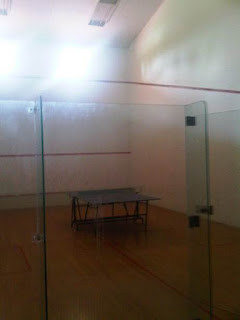 - Lack of ventilation at the multipurpose hall that houses one netball court, one volleyball court and  two sepak takraw courts. Lights were not functioning properly as well.

- An 8-lane bowling alley that cannot be used as the machine that sets the pins at the end of the lane has not been in working order for sometime. The lanes were last resurfaced in 2004 (as per a company stamp on the lanes).

A sports school is supposed to be a factory to churn the national heroes of the future. However, one cannot expect to mold champions in such conditions.

Hopefully when Education Minister Muhyiddin Yassin and his officials visit Johor on Saturday they will be made aware of the situations and come to the aid of the student athletes in Bandar Penawar.

Having re-branded the name of the school to that of the Johor prince - an avid sportsman himself - it is only fitting that our future champions be accorded 'royal' treatment in the form of world class equipment.