Why didn't we protest? 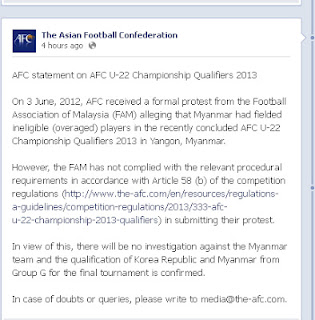 That was the headline of an article on ESPN's website as seen here.

And the statement below appeared on the Asian Football Confederation's (AFC) website;

However, the FAM has not complied with the relevant procedural requirements in accordance with Article 58 (b) of the competition regulations (http://www.the-afc.com/en/resources/regulations-a-guidelines/competition-regulations/2013/333-afc-u-22-championship-2013-qualifiers) in submitting their protest.

Here's an analogy of the situation judging by the statements made by FAM and AFC.

Your (FAM) house is robbed. You call the police (AFC) and they say they cannot fully act unless you lodge a report at the police station. You went around the house finding for clues but you can't find any. So you don't lodge a report as you believe you couldn't find any indication who might have robbed you and don't want to tarnish your image.


Question is, isn't it your duty to lodge a report and for the police (an in AFC) to investigate the matter?


Unless, you don't want to lodge a report because you know something that your neighbours don't or you have an interest of not wanting the police (as in AFC) to investigate? Perhaps I am wrong.


Analogy aside, I hate to say this but didn't my writings - just a journalist armed with a pen, paper and good internet connection - exposed about Monomotapa United masquerading as the Zimbabwe national team when they were in Malaysia in 2009? Well, Zimbabwe FA took action and led to the arrest of a former high ranking official as seen here.


Meanwhile,the Olympic Council of Malaysia board members voted (9 to 3) and decided diver Pandelela Rinong will be the flag bearer instead of national shuttler Lee Chong Wei.

Also, KL players only obtained one month of the salary instead of the three months as promised. Didn't KLFA president Astaman Abdul Aziz promised to pay settle all dues by the end of June as seen here? So how will Astaman lift KL to glory if the players are not paid?

More importantly, what happened to the money from the deal between Maxim Profile and KLFA?


Will the players play tonight as a boycott is brewing at the training ground?