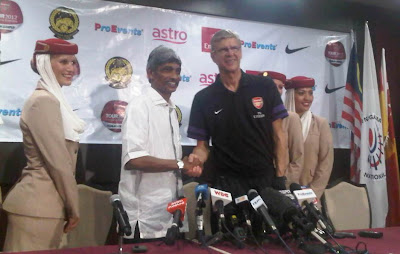 UPDATE 9.50am: National coach K.Rajagobal is concerned over Aidil Zafuan Abdul Razak, as revealed to the author earlier this morning.

Aidil suffered major cramps on the pitch after dishing out a solid performance against the Gunners.

"I really don't know how and why it (the cramps) happened but I'm really concerned about it," Rajagobal said.


"I will need to speak to our doctor to find out more about Aidil's situation. I'm not a doctor but based on my understanding there could be several factors that lead to Aidil such bad cramps...it could be because of dehydration."

"It's the fasting month and it's difficult to play such a high intensity match. Aidil knows this better and the turning point of the game was when several of our players started getting cramps including Aidil.

"Aidil played really well and I need to know more of his condition and hope it will not happen again."

"We spoke for a short while, we spoke about some things. Arsene (Wenger) asked about several Malaysian players and I gave him my views."

It could have simply been a polite gesture by Wenger or perhaps it was something more than that.

Nevertheless, Malaysia wasted a one goal lead as the Gunners managed a 2-1 win in a match at the National Stadium.

While the Arsenal players seem rather 'lethargic' and the pitch was in a poor state, two players displayed a convincing performance on the field - defender Aidil Zafuan Abdul Razak and goalkeeper Farizal Marlias.

Even Wenger praised the duo.

As Rajagobal said; "We've seen changes in Malaysian football and this is positive for our game."

Malaysia will next play Manchester City on July 30.