Nice to hear from you. According to the documents registered with us, these players are eligible (age-wise) for the tournament. AFC has a strict policy under which it ensures that due diligence is observed in the player registration process for all its tournaments.Hope this helps.

UPDATE 7am: Fielding over-aged players has been a problem in the past. Fifa, had in 2009,  ordered bone tests to be performed on players at the Under-17 World Cup in Nigeria as seen here. Pakistani squash officials, meanwhile, check their players' armpits to verify age as reported here. 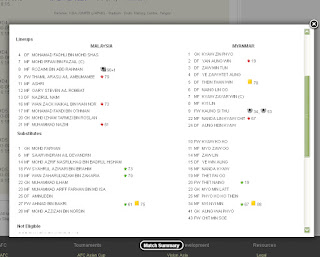 Apparently Myanmar are fielding over-aged players in the on-going AFC Under-22 qualification competition in Yangon.

Based on the start list (left), at least two players seem to be above 22 years old. Details were obtained from their respective clubs' official websites. 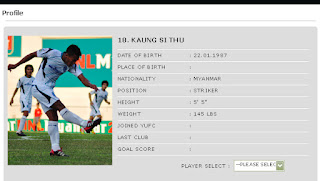 And this was taken from The Myanmar Times:

“I don’t like any form of age cheating. But in Myanmar football, it has become second nature. We need more time to fix it,” said U Aung Kyaw Lwin, Yangon United FC manager.

Perhaps the Asian Football Confederation could explain the situation better?

For the record, Myanmar are placed second in Group G with 13 points. Their final match was against Malaysia where they won 2-1.