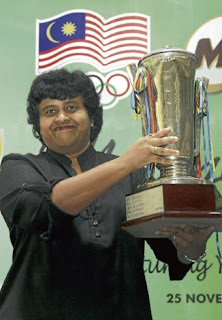 ...but let us not get carried away.

Awards are meant to inspire and motivate, not a license to be complacent.

Having spent a long time in the scene, Dr S.Shamala (pic) was selected ahead of Marina Chin and rhythmic gymnastics coach Dr Teh Lah Hoong in the 9th Olympic Council of Malaysia Women and Sports awards yesterday.

I know all three women personally. I kept in constant touch with Shamala when I covered women's hockey and when she was part of the National Fitness Council.

Marina, having won many titles in the past and a much respected figure on and off the tracks, has the motherly touch as she often asks if I've eaten a capati - she still asks me the same question till today! The same touch is seen when dealing with her students.

Lah Hoong is renowned for establishing (I dare say) one of the best grassroots gymnastics club in the country - the Serdang Rhythmic Angels. The club still enjoys the good support from construction giants IJM and continues to produce talents.

All three deserve the prize in one way or another.

But there can only be one winner.

I hope to see Shamala further promoting hockey to girls once they leave school. We do have a good number of girls playing the sports at the schools level but most drop out upon leaving school.

There should be an identification programme to tap these talents just before the girls finish Form Five to ensure they continue training while awaiting their results and recommend them to a reputable training ground if they decide to continue their studies in a college or varsity elsewhere.

Congratulations to all three women once again. Hope to see more women to play an important role in Malaysian sports.

HD says: More women are beginning to enjoy sports as seen by the number of fans at the stadiums or sporting venues.
marina chin Olympic Council of Malaysia shamala teh lah hoong women