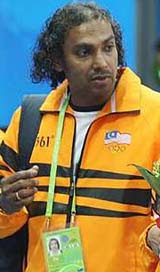 I don't understand subjective sports including certain martial arts like karate - where apparently the distribution of medals are allocated to the competing nations even before the competition starts.

I saw this happening at the KL (2001) and Korat (2007) Sea Games. Members of the Media were told by elated Malaysian officials of the number of gold medals we will be getting by the end of the day. The numbers were spot on.

But here's a twist.

National coach P.Arivalagan (pic) alleged a Malaysian official, "jealous of the team’s success", had influenced the referees to score against the national womens' team kumite. Malaysia lost 2-1 to Indonesia in the final. Read more here.

A case of the 'fixers' being fixed?